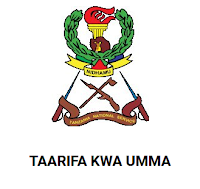 Tanzania is an East African country known for its vast wilderness areas. They include the plains of Serengeti National Park, a safari mecca populated by the “big five” game (elephant, lion, leopard, buffalo, rhino), and Kilimanjaro National Park, home to Africa’s highest mountain. Offshore lie the tropical islands of Zanzibar, with Arabic influences, and Mafia, with a marine park home to whale sharks and coral reefs.

JWTZ is the armed forces of Tanzania. They were set up in September 1964, following a mutiny by the former colonial military force: the Tanganyika Rifles. From its inception, it was ingrained in the troops of the new TPDF that they were a people’s force under civilian control. Unlike some of its neighbors, Tanzania has never suffered a coup d’état or civil war.

The TPDF was given a specific mission: to defend Tanzania and everything Tanzanian, especially the people and their political ideology. Tanzanian citizens are able to volunteer for military service from 15 years of age, and 18 years of age for compulsory military service upon graduation from secondary school. Conscript service obligation was 2 years as of 2004.

The Following are the official list of students selected to join Different JKT camps. You can Download the PDF files to view full lists of names for all Camps:

JOIN US ON TELEGRAM
Get Notifications Faster by:
(Visited 80 times, 1 visits today)